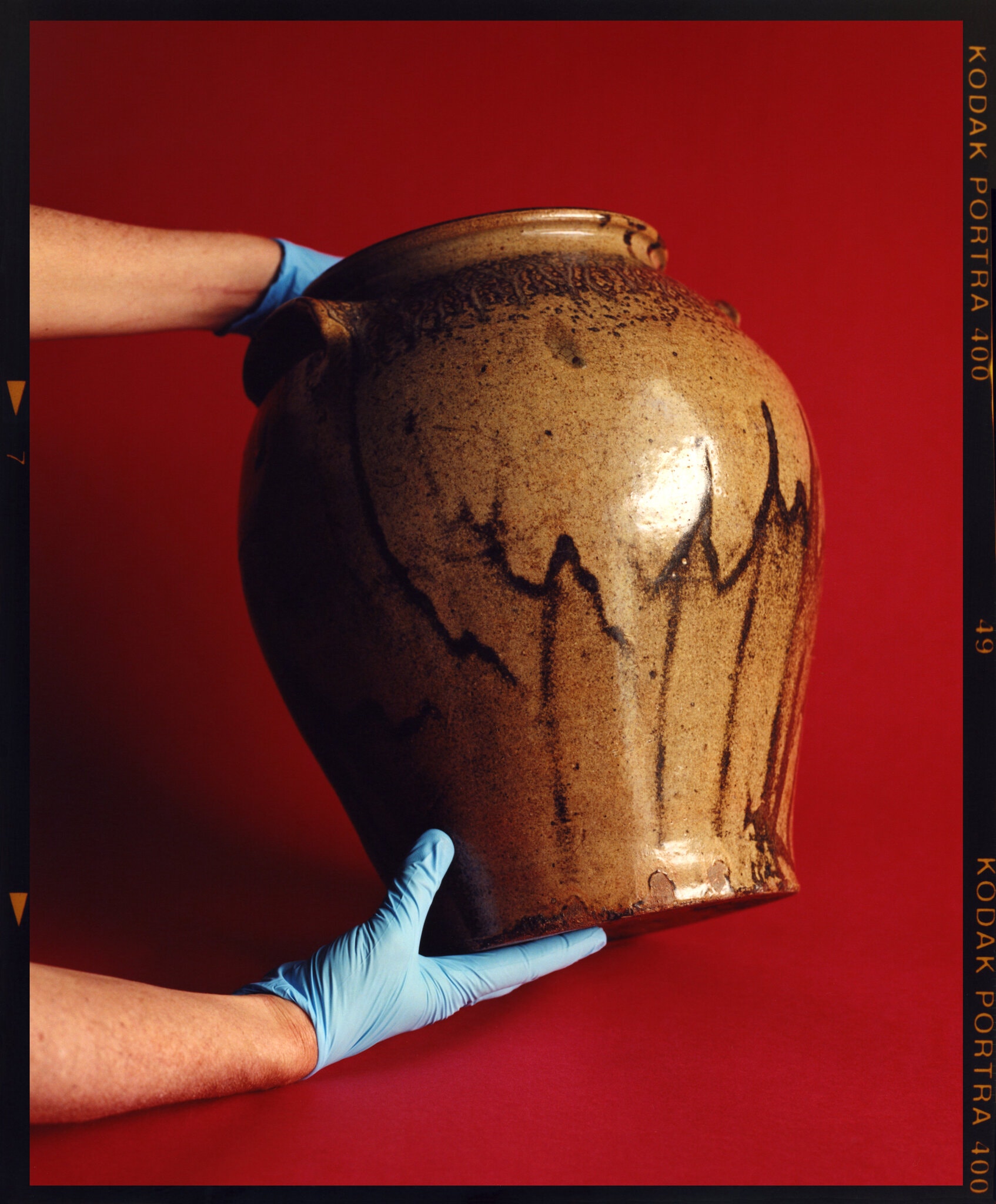 The stoneware “catination” jar by David Drake from 1836 bought at auction for $369,000 last year by the Fine Arts Museums of San Francisco. A curator there called these acquisitions a “turning point” in the stories that American art museums tell about slavery. Credit…Carlos Chavarria for The New York Times

The speckled brown storage jar looks humble, even homely, from a distance — something you might find on a back porch in the South. Come closer and you see the wild runs of alkaline glaze up and down the surface, and some revealing marks by the artist known as Dave the Potter or David Drake, who made powerful stoneware pottery in the Edgefield District of South Carolina while enslaved by different owners.

At the bottom of the pot are three marks that look like fingerprints, where someone — possibly Drake — dipped the pot into glaze. Across the shoulder runs one word that Drake inscribed, with a sharpened stick or similar tool: “catination,” a variant of catenation, the state of being yoked or chained. Just as notable, experts say, is that the jar is dated “12 April 1836,” two years after South Carolina passed an especially punitive anti-literacy law designed to prevent slaves from writing, making this single word an extraordinary act of resistance or defiance by Drake.

It’s not quite 15 inches tall, but this jar points to the artistic achievements of enslaved African Americans and the persistent erasure of their work from America’s cultural institutions for nearly 300 years.

So when the jar went up for sale in November at Brunk Auctions in Asheville, N.C., art museums across the country paid attention. The estimate was $40,000 to $60,000. But competing museums pushed the price to $369,000 with the buyer’s premium, setting a world auction record for David Drake’s work and capping off a year of major institutional purchases of his distinctive pottery.

In 2020, buyers included the Fine Arts Museums of San Francisco, the Saint Louis Art Museum, the Art Institute of Chicago and the Metropolitan Museum of Art, as well as the more historically oriented International African American Museum, currently under construction in Charleston, S.C. At a time when museum leaders are both highly motivated and heavily pressured to rethink the racial biases built into their collections, acquiring and showcasing the extraordinary work of Drake offers a dramatic way to do so, while also offering a window onto the history of slavery.

Timothy Burgard, curator in charge of American art at the Fine Arts Museums, who placed the winning bid on the “catination” jar, called these acquisitions a “turning point” in the stories that American art museums tell about slavery. He plans to install the jar prominently in a Civil War-era gallery at the de Young Museum by July 1, “symbolically centering the issue of the slavery system, which historically has been minimalized and marginalized by museums.”

According to the auctioneer Andrew Brunk, “There’s no question institutions are driving this market at the moment.” He described the demand for jars bearing writing by Drake — ranging from one word to short but expressive poems — as especially strong.

These inscriptions help to tell the story of David Drake when much biographical information is missing. Judging from census records, Drake was likely born in 1801 and died in the 1870s. Auction records show that he had several enslavers in the Edgefield area, and that he was used at least once as collateral for a loan. A voting register indicates that he adopted the name Drake after emancipation, taking the surname of his first owner. But his biography still has major gaps. It’s not clear who trained him on the potter’s wheel. (He also made pots by hand using the coil technique.) And there is no consensus about how he learned to read and write.

What is known is that he made many stoneware pots for sale, some as large as 40 gallons, that demonstrated his physical strength and virtuosity with clay and signed his name, “Dave,” on more than 100. He wrote verses or sayings on at least 40 that have survived.

Together these poem-jars, as they’re known, serve as a sort of diary, offering a different voice than the slave narratives that dominate Black literature from this period. Some, like the jar recently acquired by the Met, or the one owned by the Philadelphia Museum of Art since 1997, describe the function of the pots or boast about the amount of beef or pork they could hold. Others share religious messages or witticisms. One poem from 1857 says: “I made this Jar for Cash —/though its called — lucre trash.” Another, dated 1854, says: “Lm says this handle/will crack.” Scholars have established that the initials refer to one of his owners, Lewis Miles, who ran the Stony Bluff Manufactory, making pottery using slave labor. And in the maker’s ultimate rebuke, the handle remains intact today.

Other verses can be read against the political upheavals of the time. “I, made this Jar, all of cross/If, you dont repent, you will be lost” was dated May 3, 1862, about one year into the Civil War.

The most heart-wrenching inscription begins, “I wonder where is all my relation.” The jar, at the Greenville County Museum of Art in South Carolina, is dated Aug. 16, 1857, several years after an enslaved woman from his household named Lydia and her two sons were sent away to Louisiana, according to Leonard Todd’s 2008 book “Carolina Clay: The Life and Legend of the Slave Potter Dave.” It is not known whether Lydia was his wife.

While praised for its original research, Todd’s book has also been criticized for frequent speculation that casts Drake’s enslavers — some of whom were Todd’s ancestors — in a favorable light. For example, Todd related a story, passed down for generations but debated by experts, that Drake lost a leg after falling asleep on the train tracks one night because he drank too much.

Jason Young, an associate professor of history at the University of Michigan who specializes in African American religion and culture, finds this account unreliable. “What we do know about slavery and disability is that there were large numbers of enslaved Africans who found themselves disabled either through dangerous work regimes they were living under or because it was a popular form of punishment to take a foot or leg in response to some infraction,” Young said in an interview.

He has teamed up with Adrienne Spinozzi, an assistant research curator at the Metropolitan Museum of Art in New York, and Ethan Lasser, head of Art of the Americas at the Museum of Fine Arts Boston, to organize a traveling show on the legacy of African American potters from Edgefield that will feature about a dozen jars by Drake and open at the Met in September 2022. While smaller museums in the South, among them the Charleston Museum and the Greenville County Museum of Art, have long owned Drake’s pottery, the upcoming show will be the first of its kind in New York and Boston.

Lasser first got to know Drake’s work when he organized “To Speculate Darkly,” a 2010 show at the Milwaukee Museum of Art by the Chicago artist Theaster Gates, inspired by Drake’s pottery. Frustrated by Todd’s sometimes-cheery narratives, Gates sought to “amplify” Drake’s work, as the artist put it, through his own pots and music, including a hymnal Gates composed for a gospel choir. (One of Gates’s works had the decidedly un-sunny saying: “Bitch, I Made this Pot.”)

Lasser said that avoiding speculation about the potter’s life is one goal of the new show. “One of the things we’re trying to push back hard against is reading his work in terms of the benevolence of his enslavers, assuming his owner taught him to write or gave him permission,” he said. “There’s a risk that his story becomes a tonic to the cruelty of slavery.” 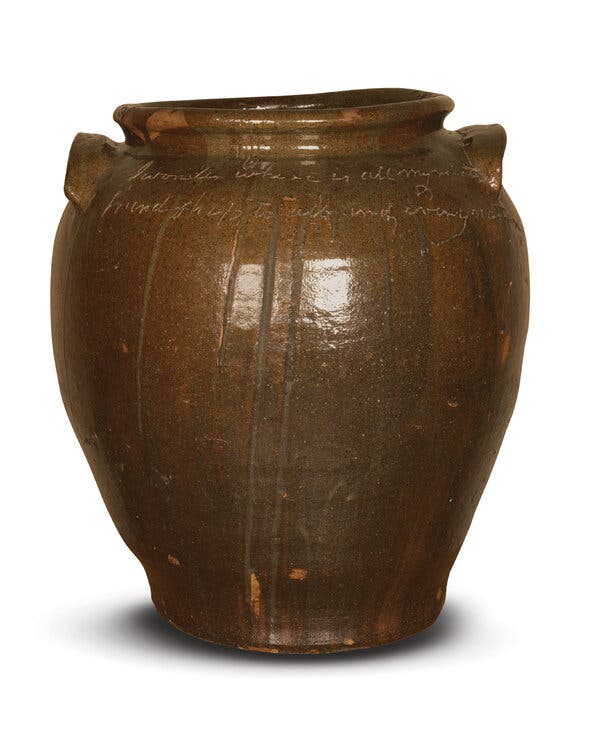 Another aim of the exhibition is to understand how the use of slave labor supported the brisk, high-volume business of 19th-century ceramic manufactories in the Edgefield area, which is celebrated for its rich red and white clays and its glossy, alkaline glazes. In 2011, archaeologists excavated a partially buried kiln there, in a site known as Pottersville. They had expected the kiln to be around 25 feet long. It turned out to be 105 feet.

“The discovery of a kiln at that scale has led us to rethink our understanding of Edgefield pottery,” Spinozzi, the Met curator, said. “It wasn’t some small operation in someone’s back yard but a massive undertaking, involving many people.” Scholars see it as a relatively rare example in the United States of “industrial slavery,” which took place in industries like mining or manufacturing domestic goods for consumption, compared with the more familiar agricultural model associated with cotton and tobacco plantations.

Spinozzi and her colleagues are currently researching Drake’s contemporaries, including an enslaved potter named Harry who also signed his name to jars. (The auction house Crocker Farm sold a circa 1840 jar signed by “Harry” in April for $120,000 to a private collector.)

This glazed stoneware jar from 1862 has a poem that reads:  “I, made this jar, all of cross/If, you dont repent, you will be lost.” It is an example of one of David Drake’s religious verses and belongs to the National Museum of American History, Smithsonian Institution. Credit: National Museum of American History, Smithsonian Institution
Most curators have dispensed with the nickname “Dave the Potter” in favor of David Drake. While acknowledging that the surname “Drake” could also be problematic because it comes from his first enslaver, Burgard, the curator at the Fine Arts Museums in San Francisco, said it “was the choice he made when registering to vote and it’s in the census records. For anyone to call him by his first name when the erasure of identity in slavery is so horrific seems disrespectful.”

This biographical erasure is one of the biggest challenges facing museums that seek to exhibit work by enslaved artists. Another is a longstanding art-world disdain for everyday functional objects.

Dr. Tonya Matthews, chief executive of the International African American museum, said her museum plans to show Drake’s work alongside objects such as sweetgrass baskets in an effort to help “dismantle this long-entrenched myth about enslaved people not having skill sets.”

Stoneware jar by David Drake at the de Young Museum will be on view July 1. Credit: Carlos Chavarria for The New York Times

“How many buildings, pieces of furniture and ceramic jars were made by people who were enslaved? Probably millions, but nobody recorded their names.”

Where to see important stoneware pottery made by David Drake

Charleston The Charleston Museum, in the museum’s First Hall.

Chicago Art Institute of Chicago, to be installed this winter.

Greenville, S.C. Greenville County Museum of Art, on view when it reopens this winter.

A version of this article appears in print on June 18, 2021, Section C, Page 1 of the New York edition with the headline: An Enslaved Artist’s Acts of Resistance.
If you are subscribed to The New York Times, click here to view the article on their website.