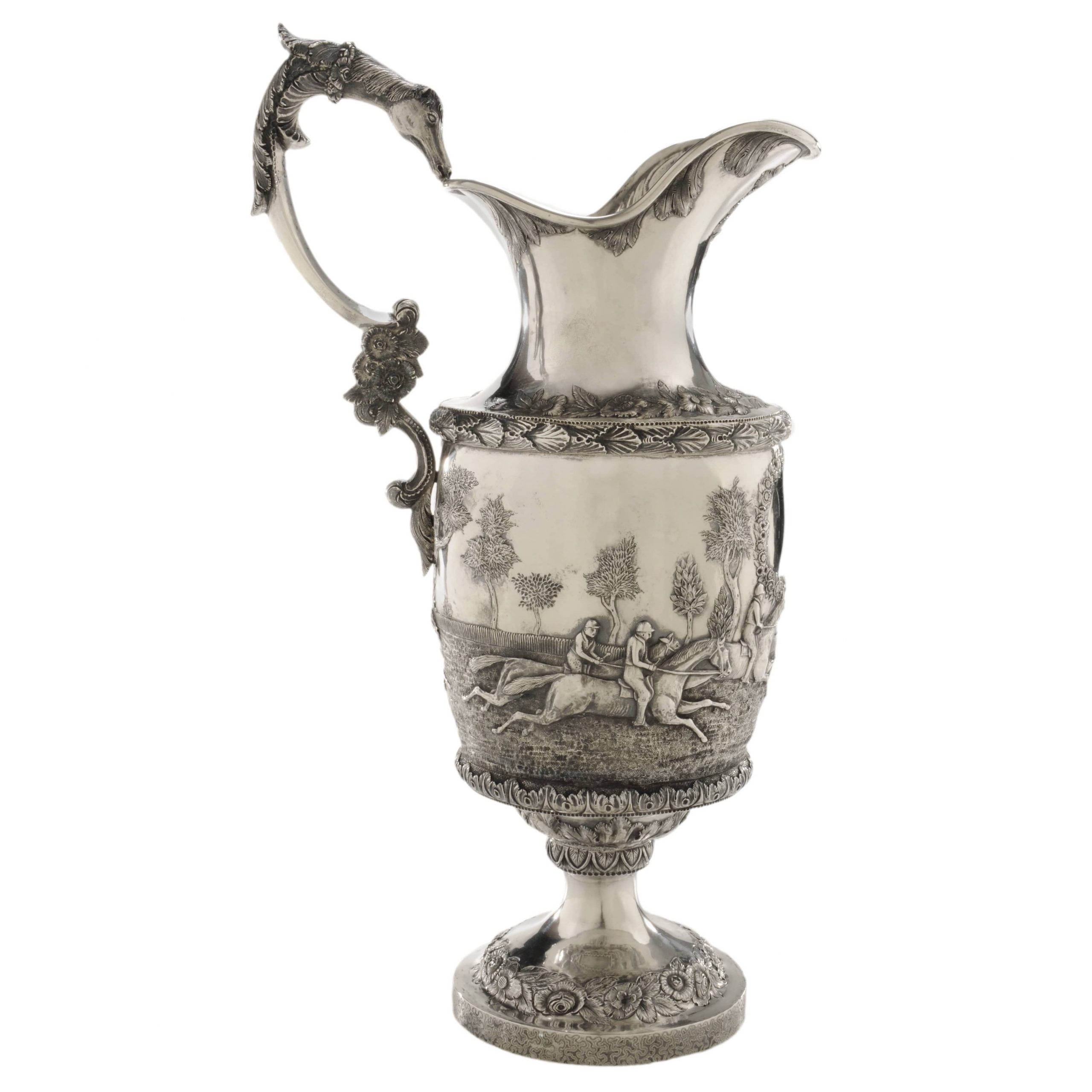 Coin Silver Ewer Horse Trophy American, mid-19th century, main body encircled with racing scene, stewards’ booth and American flag, landscaped background, acanthus and floral borders, scroll handle with horse head terminal, marked twice on outer part of the base with the mark “GW Stewart” and then engraved twice underneath the base “G.W. Stewart/Manufacturer/Lexington, KY”, (George W. Stewart, Lexington, Kentucky, working 1843-1852), floral cartouche with “Allen”, 42.57 oz. T., 15-1/2 in. small dents, scratches. Notes: George W. Stewart was active in Lexington, Kentucky between 1843-1852 (and possibly longer). During this time he is known to have produced trophies or racing prizes for a number of stakes races both in Lexington, for the Kentucky Association, and for the race meets in Louisville. There were only four examples of Stewart’s trophies known to have survived, the current example makes the fifth. The previously known examples consist of: The Chiles Stakes trophy won by “Ann Hughes” in 1846; The Brennan Stakes won by “Ann Herrod” in 1844; The Bullen Stakes at Louisville won by “Carlotta,” during the 1847 meet (which is attributed to Stewart as it is unmarked); and a fourth example, which is identical to the Brennan Stakes trophy but is neither inscribed nor dated and resides in a private collection. The current example shares several design elements with the aforementioned pieces (especially the two ewers presented to the winners of the Chiles Stakes and the Bullen stakes) but shows a slight variation in form. All five trophies feature heavy repoussée and are elaborately ornamented with horse racing motifs. The ewer being offered depicts six jockeys on horseback racing towards the finish, a grandstand with spectators watching from behind a rail, and an occupied stewards’ booth, which appears to be flying an American flag. The small details that Stewart took special care to include, such as the hoof prints in the turf and the faces of the spectators, exemplify Stewart’s attention to detail that set him apart from many of his peers. Another unique aspect of this ewer is that Stewart marked the piece a total of four times as it is incised twice on the outer part of the base with the mark “GW Stewart” and then engraved twice underneath the base “G.W. Stewart/Manufacturer/Lexington, KY” While the presence of four marks seems highly unusual it perhaps speaks to the extremely high quality of craftsmanship present in this particular trophy and Stewart’s desire to be recognized as the manufacturer of the piece and not to be mistaken as having copied the design or merely retailed the piece. Indeed, the true authorship of the racing trophies produced in Lexington from 1840-1855 has been a matter of some uncertainty, as Garner and Winchester produced trophies with nearly identical ornamentation to those made by Stewart, and Samuel Kirk of Baltimore is closely tied with the heavy repousséed style employed by Stewart during this time period. However, the double engraving of “G.W. Stewart/Manufacturer/Lexington KY” leaves little room for question as to the maker of this magnificent ewer and the location in which he made it.