Brunk Auctions’ “Premier” sale in Asheville, North Carolina, on Saturday, September 11, was a day when, in the words of American fine art specialist Nan Zander, the history of American painting was on display. In addition, major collections of American furniture and Delft pottery were scheduled for sale. It was a two-day auction, but with so many exceptional lots, this report focuses on an exceptional Saturday.

Perhaps the most dramatic moments of the eight-hour sale occurred at lots 1111 and 1112, the first of the Delft lots from the superb collection of Constance (1929-2014) and Dudley (1926-2007) Godfrey. Since 2018 Brunk Auctions has had various components of the massive Godfrey collection in at least six sales. The renovated American art wing of the Milwaukee Art Museum was named for the couple. 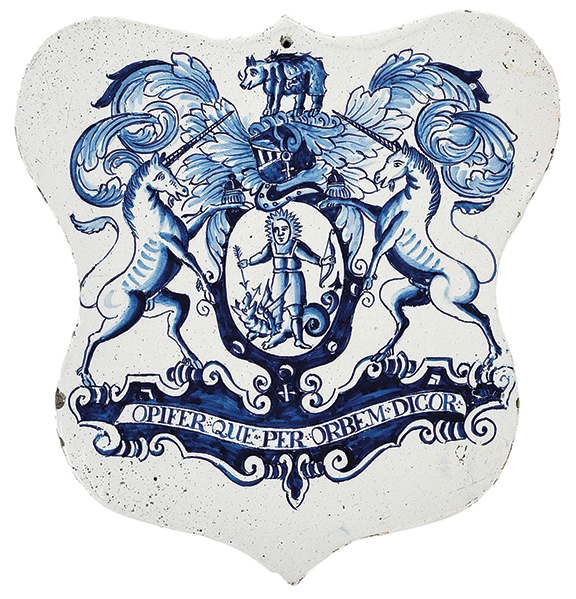 The crest on this 1720-40 Delft pill tile features Apollo, the god of healing, subduing the dragon of disease over a Latin motto translated as “Throughout the world, they speak of me as the bringer of help.” The unicorns apparently represent King James I bestowing approval on the profession. At the top of the tile is a rhinoceros, whose horn was believed to have medicinal properties. The tile, which measures 11 5/8″ x 11¼”, is pierced for hanging. It sold to a phone bidder for $49,200 (est. $12,000/15,000). 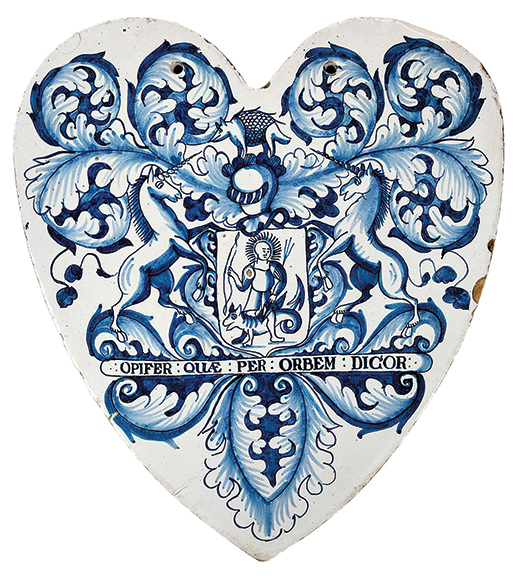 This heart-shaped Delft pill tile, inscribed with a crest similar to the Apollo pill tile, has elaborate foliate scrolls and measures 11 7/8″ x 10¾”. It sold for $51,660 (est. $12,000/15,000) to an English dealer, the same phone bidder who won the Apollo pill tile.At least five staffers on the phones managed the bidding war for lot 1111, a large 1720-40 Delft blue-and-white shield-shaped pill tile estimated at $12,000/15,000. These porcelain tiles, with the crest of the Worshipful Society of Apothecaries, were awarded to newly trained London pharmacists. Two phone bidders battled for the tile. One dropped out as Internet bidders jumped in and then returned to bid again. Phone bidder 627, an English dealer, prevailed over phone bidder 632, an American private collector, at $49,200 (including buyer’s premium).

The next lot, a large heart-shaped Delft pill tile with a similar crest, date, and estimate, provided an Anglo-American rematch. You could feel the determination in the American’s bidding as he went up against the English dealer and others on the Internet. In the face of fast-reacting opposition, the Englishman dropped out, and it looked as though the American would finally triumph. But, alas, the Englishman rejoined the bidding, and the American yielded again, this time at $51,660. Frustration and disappointment were as tangible as the tile itself. 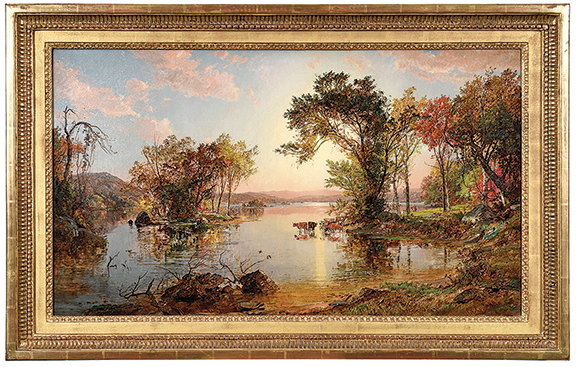 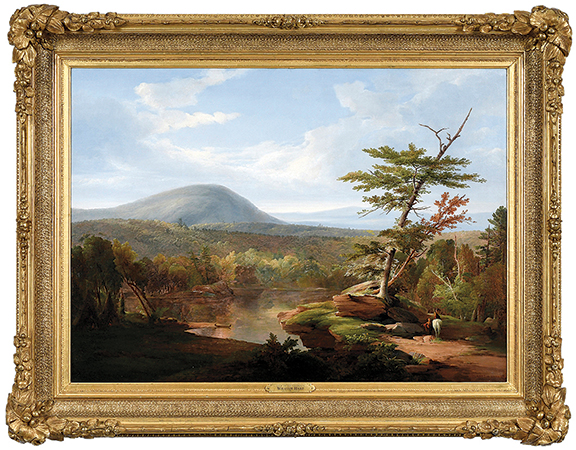 William Hart (Scottish/American, 1823-1894) painted View of the Catskills in 1849 while living in Albany, New York. Later that year, Hart, who primarily painted portraits, received financial support from a local benefactor to study landscape painting in Europe. He returned to the States in 1853. Perhaps it was this 26¼” x 36¼” (sight size) oil on canvas that convinced his benefactor to invest in the 26-year-old novice. The painting sold for $61,500 (est. $35,000/55,000). 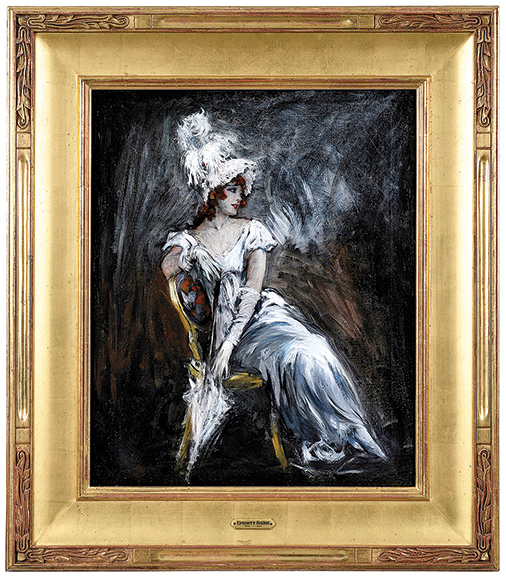 • Study for a Summer Afternoon by Asher Durand (1796-1886), a circa 1865 signed oil on canvas consigned by the Virginia Museum of Fine Arts, had strong absentee bidding. That faded at $38,000, and a private collector on the phone prevailed to claim the painting for $56,580. 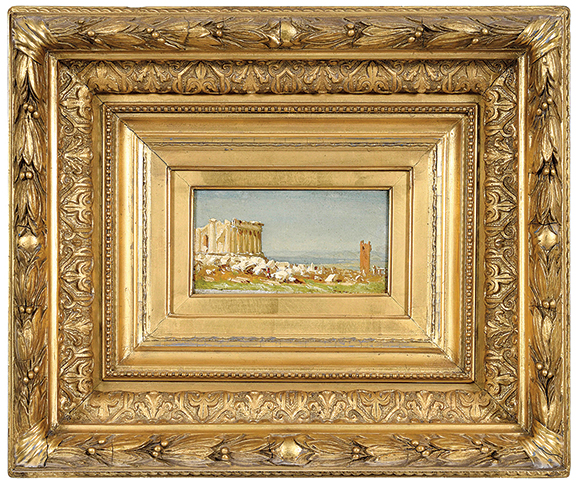 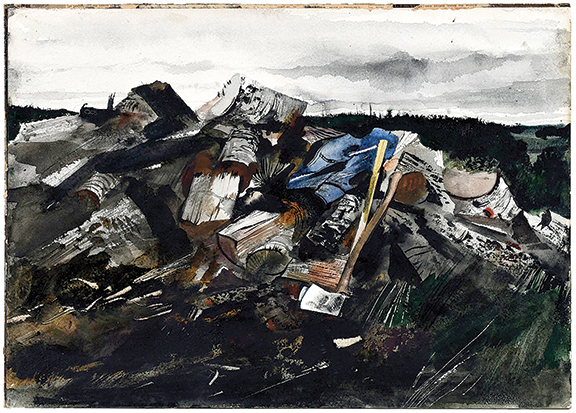 • Sunset by William Sonntag (1822-1900), an oil on canvas that hung over the mantel in the Finns’ great room in Litchfield, Connecticut, sold above estimate at $39,360 to a New York dealer on the phone. 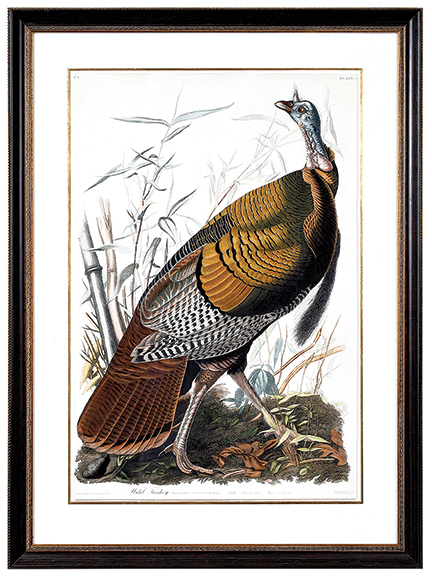 The top furniture lots included two of the earliest pieces in the sale. A carved walnut with white pine chest in two sections, attributed to the Boston shop of Mason-Messenger, circa 1680, was crafted during what has been called the Pilgrim century (1620-1720). With five paneled, dovetailed, and side-hung doors, the great chest sold to the phones for $86,100 (est. $30,000/50,000). A 1735-50 Charleston, South Carolina, mahogany dressing table with an unusual drawer arrangement—three dovetailed drawers set with large batwing brasses—sold early in the day to a phone bidder for $49,200 (est. $20,000/30,000). 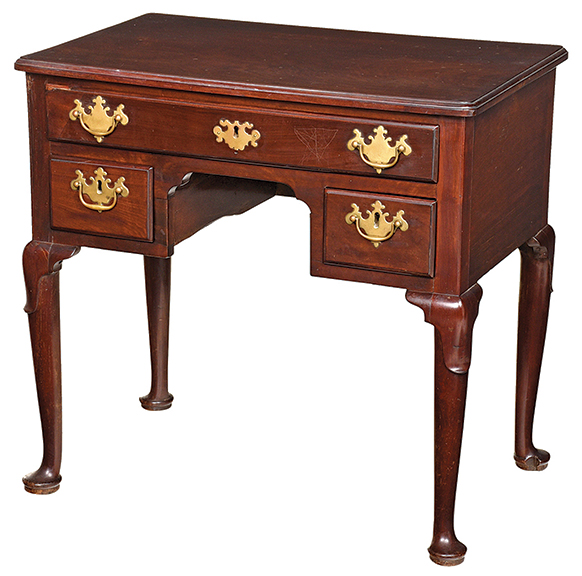 Joel and Ann Finn acquired this Chippendale bonnet-top high chest in the 1980s from Avis Hicock. She lived on Main Street in Woodbury, Connecticut, in the home that was originally owned by her great-grandfather David J. Stiles. The 94″ x 43″ x 22″ two-section chest sold to the phones for $46,740 (est. $40,000/60,000).The top furniture lot from the Finn collection was a 1770-80 Woodbury, Connecticut, Chippendale bonnet-top high chest with an attractive dry surface. The 94″ tall chest had descended in the Stiles family of Woodbury and was included in Making Furniture in Preindustrial America: The Social Economy of Newtown and Woodbury, Connecticut by Edward S. Cooke Jr. (1996). It sold to the phones for $46,740 (est. $40,000/60,000). A nearly identical chest from the Finn collection that had also descended in the Stiles family was passed when it reached only $17,000 on a $20,000/30,000 estimate.

The Finns collected Connecticut-made Chippendale furniture. A Woodbury chest with a closed bonnet, a shell-carved central drawer above five graduated drawers, and a deep shell-carved lower drawer sold to the phones for $27,060 (est. $15,000/25,000). The Finn furniture, much of it handmade between 1780 and 1830 by Connecticut cabinetmakers, came to the sale from Bluffton, South Carolina. Ann Finn, known professionally as Ann Y. Smith, moved south after a 2018 exhibition of the Finn collection at Jeffrey Tillou Antiques in Litchfield, Connecticut. 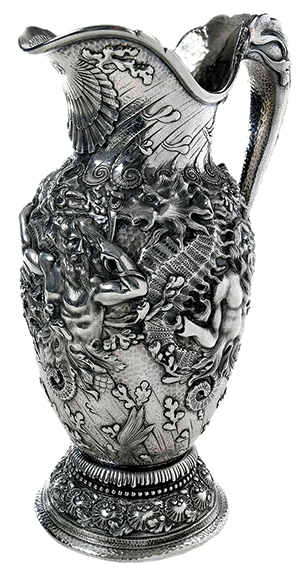 The top silver lot was this Tiffany sterling pitcher with Triton, Poseidon, and giant sea horses on the body and a sea creature for a handle. The 13½” tall pitcher sold on the Invaluable bidding platform for $28,160 (est. $10,000/15,000).The sale was not limited to American paintings, American furniture, and Delft tiles. Two exceptional lots from other categories call out for attention, a pitcher and a shotgun. Triton and his father, sea god Poseidon, stand tall among giant sea horses in a rough sea on the Tiffany sterling pitcher. A scaled sea creature serves as the handle on this stunning piece that sold on the Invaluable bidding platform for $28,160 (est. $10,000/15,000).

“This gun sold itself when it walked in the door,” said Brunk Auctions’ firearms specialist Corey Jones. During the sale of this circa 1984 Boss & Company double-barrel shotgun, Jones was answering questions from staffers while phone bidders were on the line. The 44″ long gun with a fitted leather case (not shown) sold to a phone bidder for $116,850 (est. $60,000/80,000).Established in 1812, Boss & Company is London’s oldest gun maker. For over 200 years, the motto of the shop, where guns are made by hand using traditional methods, has been “Best Guns Only.” One of the company’s best double-barrel shotguns from 1984, with extensive engraving on the sidelocks, receiver bottom plate, barrel fences, and barrel tang, sold to a phone bidder for $116,850 (est. $60,000/80,000), the third-highest sale of the day. 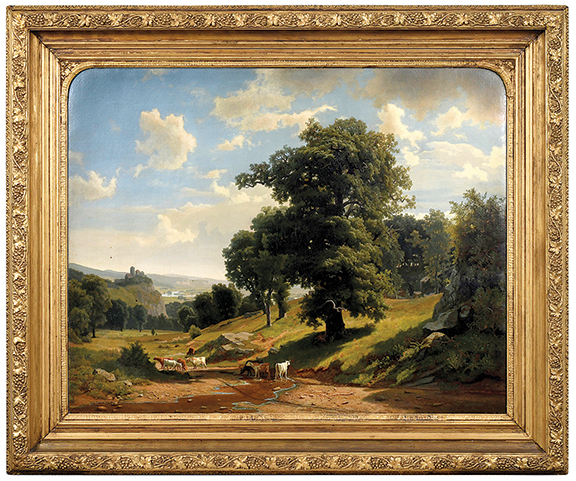 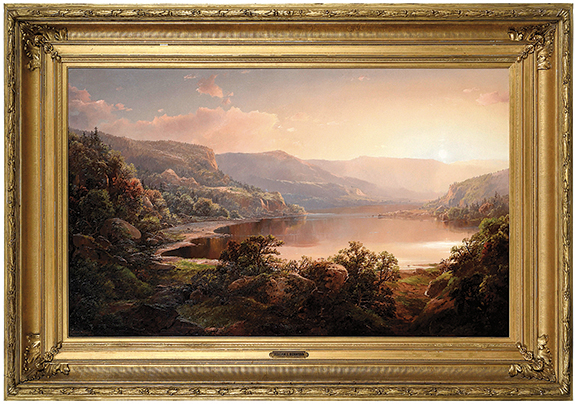 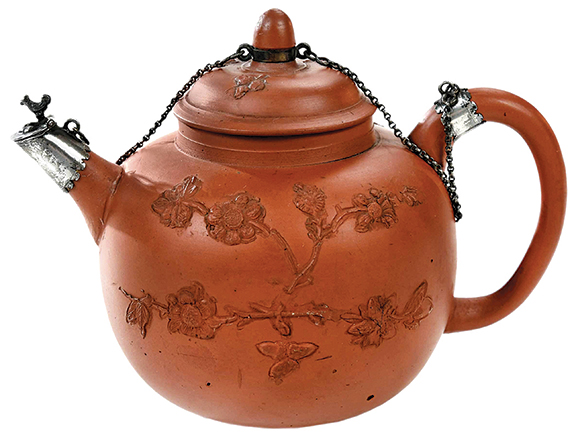 Constance and Dudley Godfrey’s exquisite taste was evident in this Elers brothers silver-mounted unglazed redware teapot. The top is decorated with three applied acorn sprigs and the body with applied flowering prunus branches. The 5″ x 6¾” pot, made in Staffordshire circa 1695, sold to a phone bidder for $19,680 (est. $10,000/12,000). 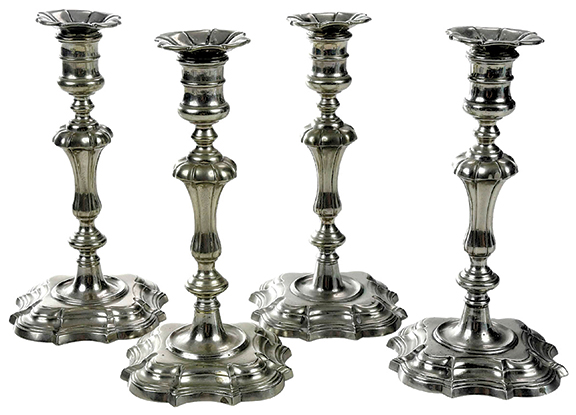 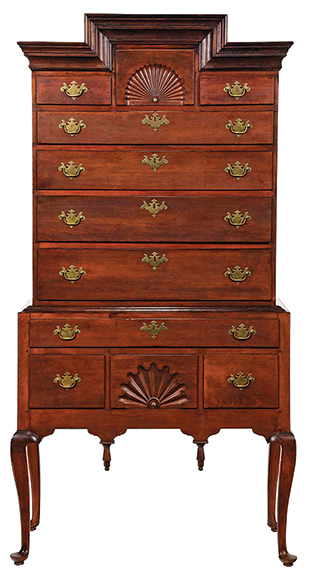 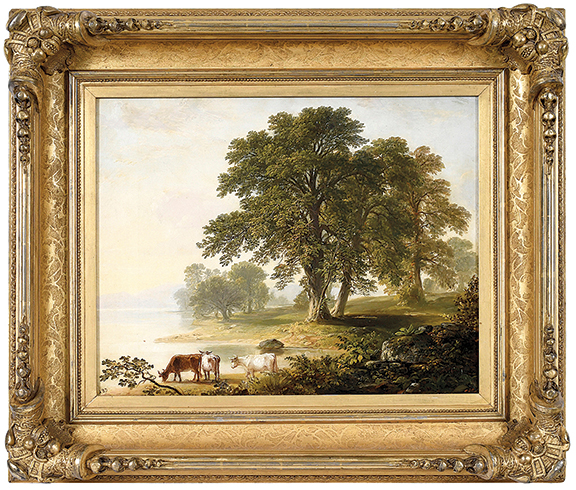 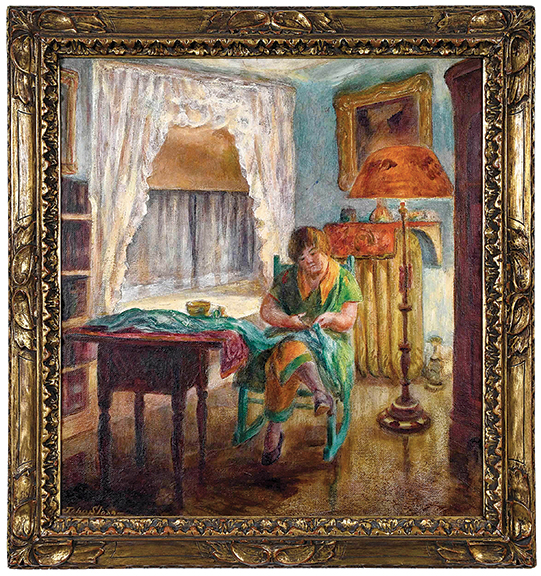