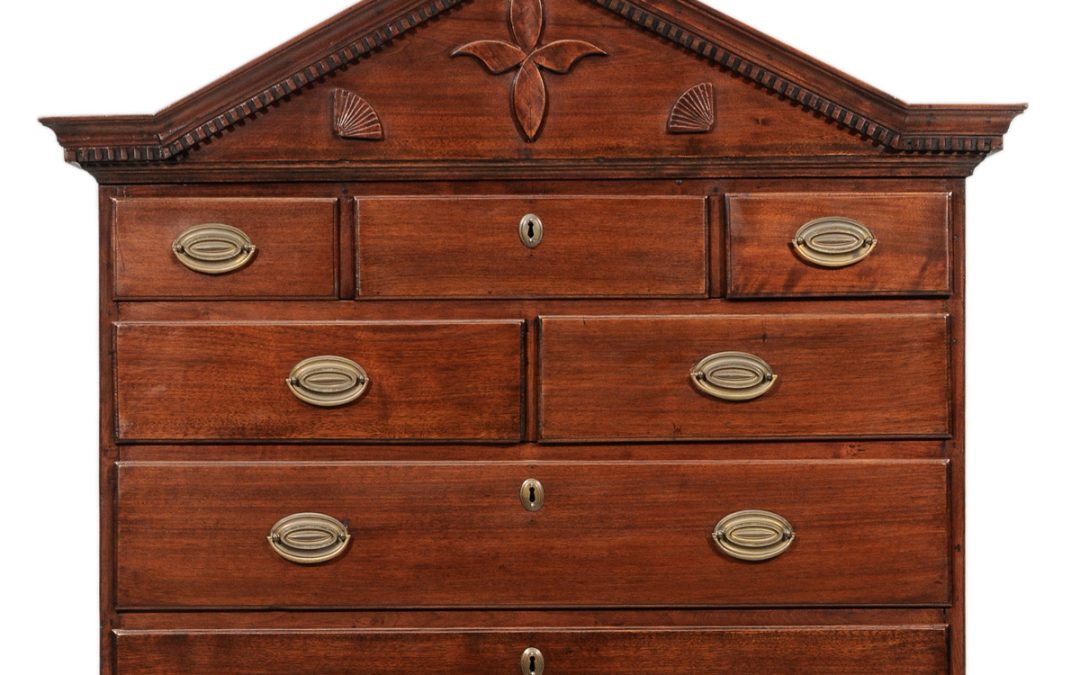 Asheville, NC. A strong crowd gathered at the gallery for the sale on a wintery Saturday, competing with a record number of bidders on the phones and on the internet, and ultimately pushing prices through the day often to multiples of their presale estimates. In keeping with the eclectic offerings, The 2,200-plus registered bidders represented a wide range of institutions, collectors, consultants and dealers from around the world, but in the end it was North Carolina’s own Jesse Needham, a cabinetmaker from Randolph County working at the turn of the 19th century, who won the day. From the estate of Patricia Chatham, his elaborate walnut high chest ranked as the very best example of the form, and several collectors and institutions in the room and on the phones competed for the Piedmont masterpiece. Bidding opened at $30,000, and escalated rapidly, with the field narrowing to two committed bidders as the price crossed the six-figure mark. A private collector won the battle, and the hammer fell at $230,000, a record price for the maker, and a new record price for North Carolina furniture (prices quoted do not include the 18% buyer’s premium). The result ranks in the top ten prices ever achieved for southern furniture at auction.

Among the many estates and collections represented in the sale were objects from the Robert Daniel estate at Brandon Plantation, Virginia. The historic home yielded many family treasures, among them a rare Thomas Sully portrait of Peyton Randolph, selling to a museum for a strong $20,000, and a pair of Chinese armchairs selling online for $55,000 against an estimate of $1,000-2,000. The estate of Mary Duke Biddle Trent Semans was also represented, highlighted by a Georg Jensen silver tea set and tray, selling for a combined $33,000. Institutional consignments included works on paper from the Morehead Cain Foundation in Chapel Hill, lead by a rare Charleston Maritime print that sold for $10,000.

Continental ceramics, bronzes, and furniture were strong throughout the day, with many lots surpassing their estimates by a wide margin. The one day sale closed with a 95% sell through rate and grossed over two million dollars, well over the preliminary estimate.

Stay tuned for our March 15-16 auction, with an eclectic mix of over 1100 lots of fine art, furniture, jewelry and decorations. See our website for an early peek at some highlights! he catalog will be available online by February 18th.

Always accepting quality consignments. Contact us for a free consultation.