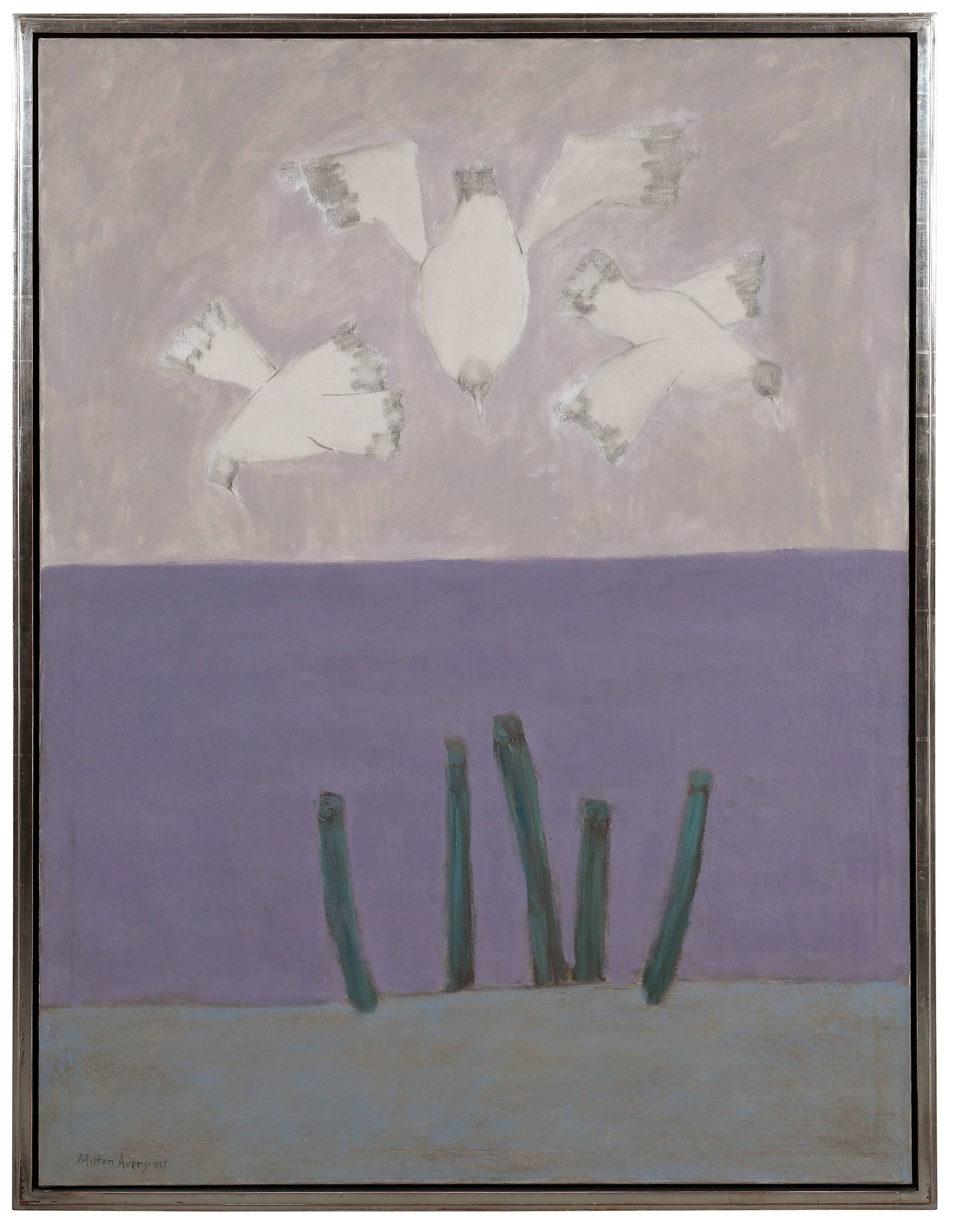 “I try to construct a picture in which shapes, spaces, colors, form a set of unique relationships independent of any subject matter. At the same time I try to capture and translate the excitement and emotion aroused in me by the impact with the original idea.” -Milton Avery

Birds Over Sea, 1957, is the embodiment of Avery’s mature period. The subtle color harmonies are those he favored. There is a tremendous sense of order, color, and space that occurs from his many years of exploring paint, brush, and its effects on canvas. He paints without complicating the matter to arrive at a simple but powerfully controlled composition. It is flattened yet has an expansive sense of space. This painting is exquisitely organized and intentional. A moment on the beach at Provincetown has become a ‘poem’ where his love of nature is fully expressed. In fact, he does not care if the viewer necessarily knows what he is painting, as seen in the pylons below the gulls. The shape and color of these pylons are essential to his composition. As Avery states, he is “seeking pure abstractions; rather the purity and essence of the idea – expressed in its simplest form.”

In the summer of 1957, Milton Avery arrived at Provincetown, Massachusetts to enjoy the coast, paint, and reconnect with two old friends, Mark Rothko and Adolph Gottlieb. The home which he, his wife, Sally, and his daughter, March, would share provided a larger space on the second floor in which to paint. He would usually do oil paintings on paper in the summer and then translate those to larger canvases in the winter. This summer, motivated by a larger space and perhaps his two friends, he began to paint large scale paintings on canvas. These larger scale paintings coupled with the subtle color harmonies that he had been using since his heart attack in 1949, would mark a breakthrough in his painting and usher in this “mature period.” Early on, Avery was already exploring abstractions, divisions of color, and simplified shapes in his art that would later resurface in the 1950’s and 60’s in such sentinel works as his Moon Path series. It is tempting to see these late paintings beside Gottlieb’s Burst series or to compare the division of color in Birds Over Sea to Mark Rothko’s color divisions in his abstract compositions and think that he had only just arrived at these simplified and abstracted forms.

Sally, in an interview after Avery’s death in 1965, said of the period following his heart attack that he went on to do his “most meaningful work.” His friend, Mark Rothko would eulogize this great artist in his Memorial Address, January 7, 1965, in what stands as lasting and intimate tribute:

“Avery is first a great poet. His is the poetry of sheer loveliness, of sheer beauty. Thanks to him this kind of poetry has been able to survive in our time. This – alone – took great courage in a generation which felt that it could only be heard through clamor, force and a show of power. But Avery had that inner power in which gentleness and silence proved more audible and poignant.

There have been several others in our generation who have celebrated the world around them, but none with that inevitability where poetry penetrated every pore of the canvas to the very last touch of the brush. For Avery was a great poet inventor who had invented sonorities never seen nor heard before. From these we have learned much and will learn more for a long time to come.”

To exact a precise biography of Dr. Luther W. Brady, a man as great in science and medicine as he was in his support of the arts, would take many pages and the words of the many he has touched. In his extraordinary life, he was a world-class pioneer of advancements in radiation oncology and beginning in 1953, a friend to artists, gallerists, directors, and curators of major museums.

In a tribute, Brady’s colleagues described this passion to support and mentor students by saying, “His residents knew they were in the presence of greatness, yet Dr. Brady was kind, gracious, generous and devoted to each of them. As their Chairman, Dr. Brady also eagerly introduced his residents to the arts and often provided concert experiences and introductions to renowned artists in Philadelphia. When asked, he was always there for them.”

Brady was a generous and active patron of the arts. Brady said of himself in a 1976 interview for Philadelphia Magazine, “Living with art is an adventure of constant discovery. I never tire of it, it is always different. I see it changed by light, dark, by one’s mood, by climate. Even people in a room change it. The collection grew and became diverse, as my interests became diverse over different periods. An art collection is a personal record.” He served on many boards, including the Museum Committee of the Pennsylvania Academy of Fine Arts, and was Chair of the Executive Committee and member of the Board of Trustees at the Philadelphia Museum of Art. When controversy broke out over the rather secretive sale of Thomas Eakin’s masterpiece,

The Gross Clinic, to two out of state institutions, he helped champion the effort to keep the iconic painting in Philadelphia. He continuously funded and lent art for major exhibitions. He donated his vast art collection to museums such as the Philadelphia Museum of Art, The Luther W. Brady Gallery at George Washington University, The Phillips Collection, The Pennsylvania Academy of Fine Arts, The Ackland Art Museum at the University of North Carolina, The Delaware Art Museum, The Michener Museum, The Nelson-Atkins Museum, and others.

It was his passion and enthusiasm for science and for the arts that caused him to give — both in life and in death — to the public trust, to institutions, and to all for the benefit of future generations. In keeping with this, the proceeds from the sale of Birds Over Sea will benefit The Luther W. Brady Foundation. It was his desire that the sale of this painting would help ensure that his work to support students of both science and the arts would continue in perpetuity.

This lot is accompanied by a letter from William McWillie Chambers III, Vice President of Grace Borgenicht Gallery from 1973-1995, stating that the painting was consigned to the Grace Borgenicht Gallery by the Estate of Milton Avery during the 1980’s. He states, “I remember this ‘impressive and important’ Avery very well.” It is also accompanied by the original receipt from Riva Yares Gallery.

Condition: three small points of retouch at middle between grasses, crackle, stretcher marks an effect of pigment being caught on the stretcher line by the pressure the artist exerted on the canvas, paint stains on canvas verso likely studio work related and not associated with a conservation effort, a condition report by Colin Post accompanies the lot, click here to view ; frame with wear