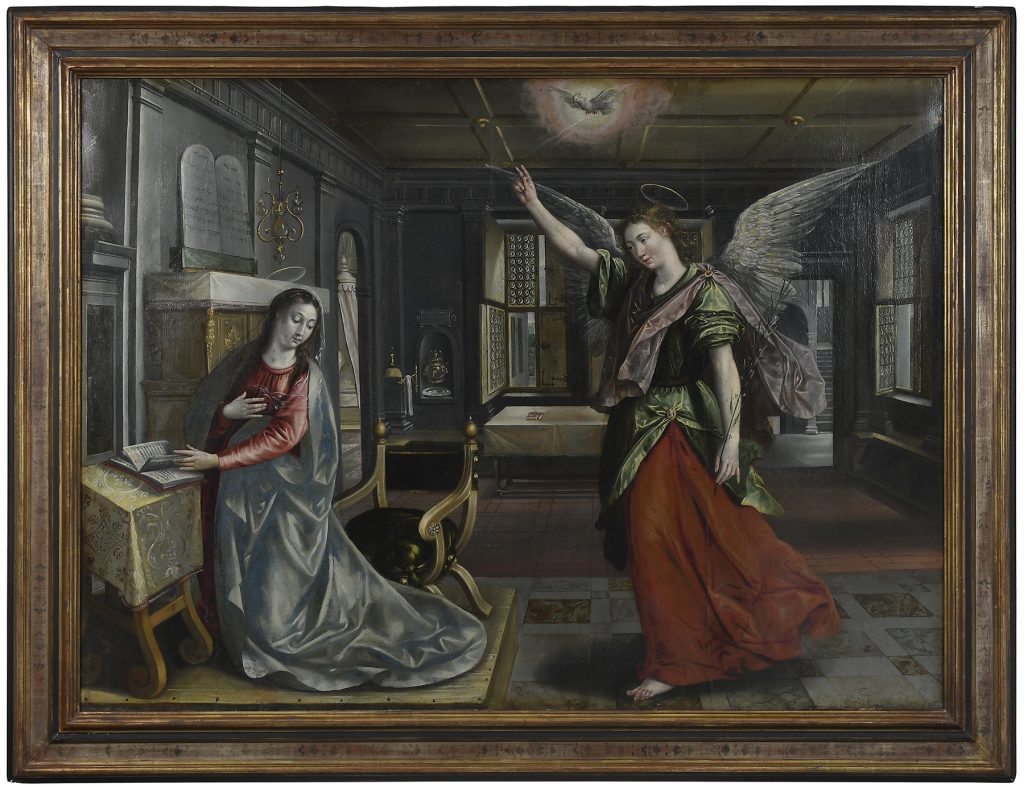 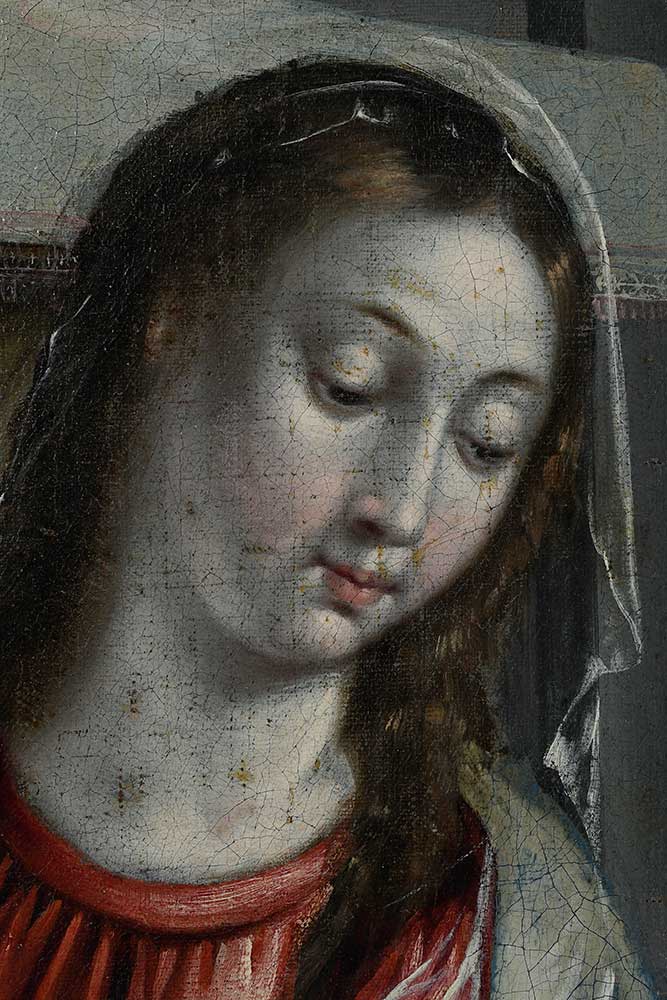 With its exquisitely detailed biblical scene, this important Maerten de Vos painting represents a tradition of early to mid sixteenth-century Dutch art. Its rich and elaborate depiction of the Annunciation within a lady’s public and private rooms conveys the ideals and values of both material and spiritual wealth. This elegant domestic setting for the Annunciation is, in a way, a vital precursor to the Dutch Golden Age of painting and its explosion of genre paintings, portraits, still lifes, and landscapes in the seventeenth century.

In this composition, de Vos not only speaks of the Annunciation, as described in Luke 1: 26-38, in which Archangel Gabriel appears to the Virgin Mary, but he narrates the life of Christ, including the coming of the Messiah, and the ultimate act of salvation. The Ten Commandments, depicted by the dual tablets, represent the Old Covenant that is fulfilled by the coming of Christ and the establishment of the New Covenant. Salvation, the cleansing of sin, is found represented in the ewer, bowl, and towel. The lapis blue robe symbolizes the Virgin and the red undertunic, the blood of Christ, or the Crucifixion. Perhaps the most beautiful device is found in the very delicate rendering of the dove woven within the lace of the veil over Mary’s heart. This detail reminds the viewer of the presence of the Holy Spirit and the point of conception.

An engraving by Hendrik Goltzius of the Annunciation, circa 1579, is thought to be a possible reference to this painting. In her description of the engraving, Dr. Susan Anderson, then the Interim Mellon Coordinator of College Programs at Amherst College, states,”[a] youthful Goltzius produced this reproductive engraving after a design by the sixteenth-century artist Marten de Vos for the Antwerp publishing house Aux Quatre Vents. A similar painting by de Vos survives, although the drawing that likely served as the print’s model does not. Presuming that Goltzius was given liberty to revise his source, he reversed the painting’s overall composition but varied the figures so that their right and left hands remain consistent: Gabriel, for example, enters from the right in the painting and the left in the print, but in both he gestures heavenward with his right hand and holds a lily – the symbol of the Virgin – with his left. Goltzius could have reproduced the painting in the same orientation, but reversing it with altered elements allowed him to imbue the scene with a greater vitality, especially in the twisting body of the Virgin.” 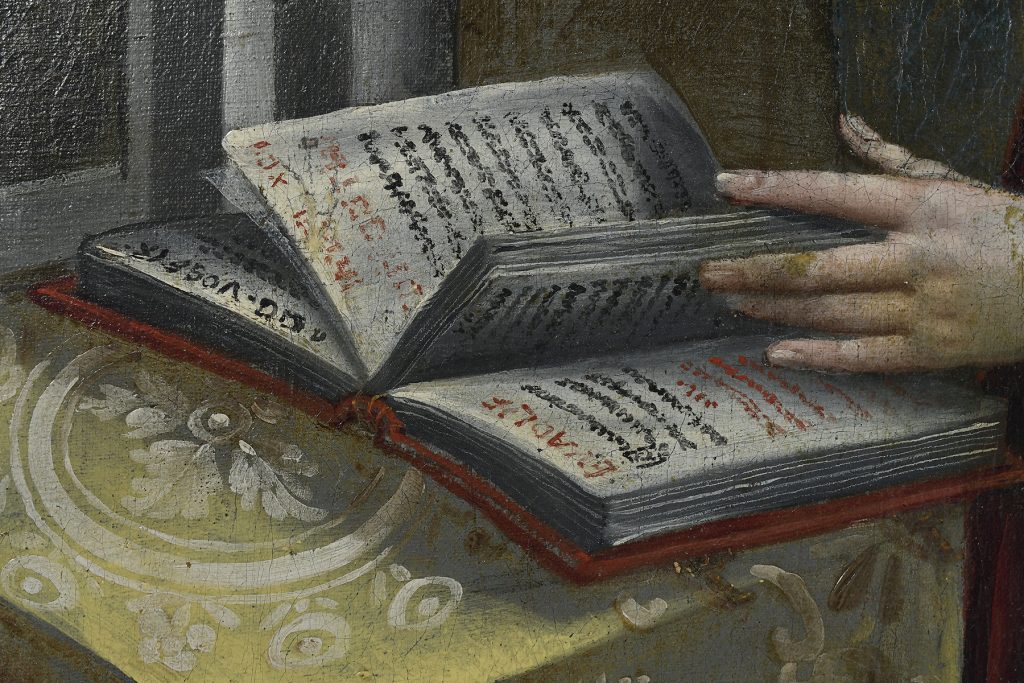 This painting by Maerten de Vos is an extraordinary example of a sixteenth century Flemish art. It marks an important moment in Northern European religious art, skillfully illustrating both the peace and beauty of the Annunciation, as well as the approaching sacrifice of Christ. More broadly, de Vos’ painting marks a significant moment in Dutch history and European religious tradition, capturing on canvas a period of prosperity, burgeoning ideals, and conflict that together would foretell of independence and the Dutch Reformation. 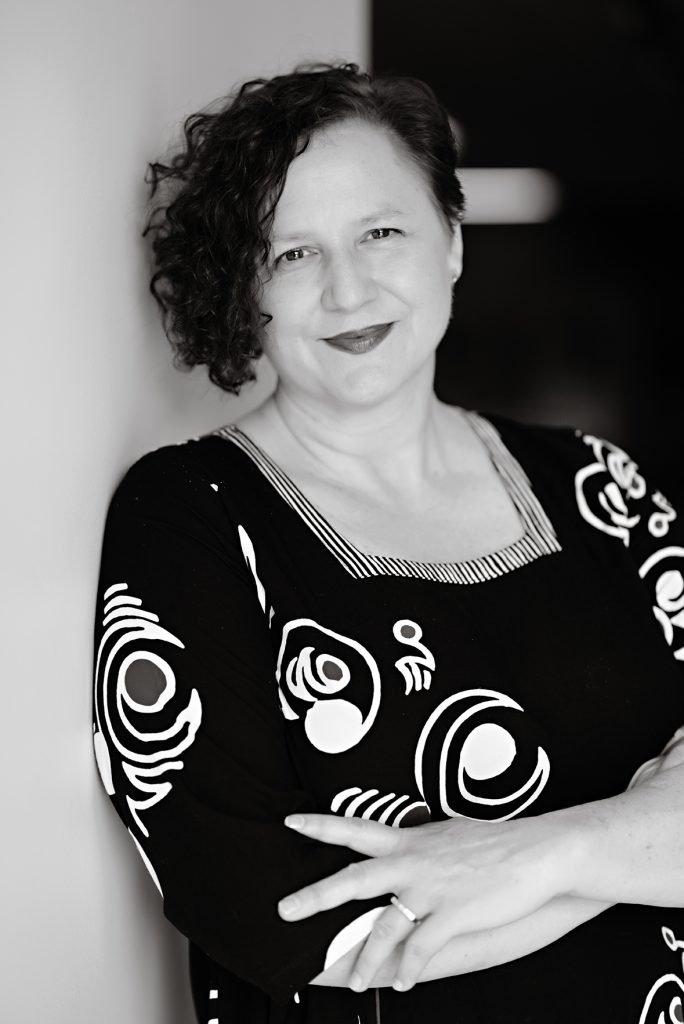