Leading with the Bishop James Madison Map of Virginia, a Strong Showing and Impressive Results at $2.6 Million 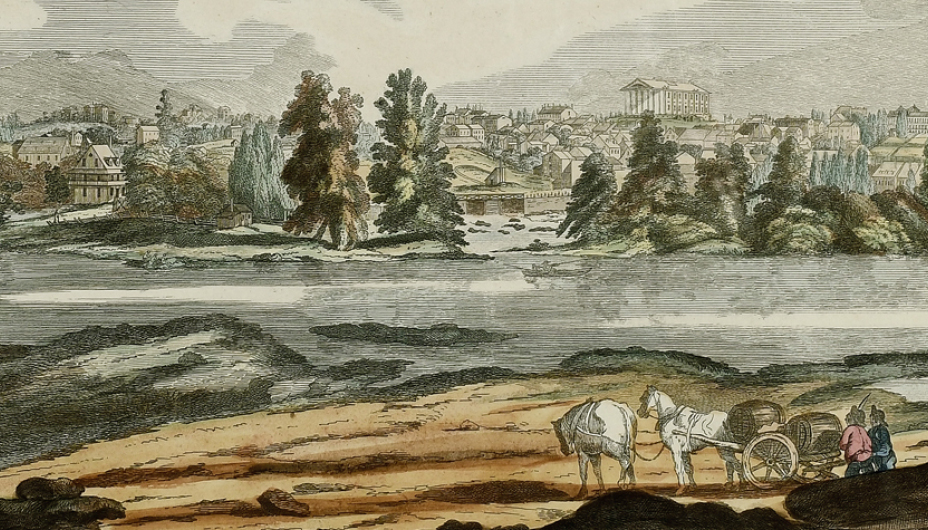 Representing 134 consignors, the largest category sold was Fine Art/Frames grossing $690,352.00 (316 items), with the second largest category of Asian Art (298 items).  Brunk saw strong attendance from Wednesday and Thursday on-site previews, which translated to a lively auction room energy culminating during the Saturday session. With hot action from absentee bidders, phone bidders, three online platforms, and a large sample of floor bidders, this three-day auction was a standout with 1,777 lots.

The sale was led by the Bishop James Madison Map of Virginia (1749-1812), sold for $252,000 to benefit the Colonial Williamsburg Acquisition Fund.  Selling to an anonymous buyer, this map was hotly chased by an absentee bidder and phone bidder. This extremely rare map was acquired by Colonial Williamsburg directly from a descendant of the printer. As such, this is perhaps the only known copy of Madison’s map to survive as it was issued in six individual sheets with uncut margins. The map was carefully assembled for exhibition by Colonial Williamsburg’s paper conservator so that it retains the margins. The fine condition of this example surpasses any other known copy of the map.

This oil on canvas, The Happy Mother, descended to Marion and Theodore Gore from the collection of Robert Hayes Gore, a newspaper owner, entrepreneur, and ambassador to Puerto Rico (1933-34) while governor.  Robert Gore owned the Green Park Inn in Blowing Rock, NC while Elliott Daingerfield called Westglow (less than five miles from the Inn) his studio home. For $48,000, this desirable painting headed home with a floor bidder.

The bowl’s sgraffito (incised) decoration and bold blue was actively chased by over ten bidders– tension in the room was high when five phone bidders stood simultaneously, and the entire consignor family was present in the crowd.  Drawing a total of $46,500, this large punch bowl is headed to the Midwest. Requesting something “New Yorkish,” Eleanor Roosevelt commissioned a punch bowl in 1931 for her husband, Franklin D. Roosevelt, then governor of New York. Twenty-six-year-old designer Viktor Schreckengost (Ohio/Florida, 1906-2008) created a bowl inspired by the New Year’s Eve festivities he had recently enjoyed in the city. The motifs on the bowl recalled his memories of the brilliant artificial lighting of Broadway and Times Square, jazz music and Radio City Music Hall, illegal cocktails sipped in nightclubs, and the starry night sky glimpsed above looming skyscrapers.

This Bather, as captured in 1937 amongst a lush landscape, drew a plethora of attention on Saturday, concluding with a sale price of $76,800 (estimate $15,000-$20,000).  Fernando Cueto Amorsolo’s (Filipino, 1892-1972) following has grown significantly worldwide in the past five years. Amorsolo’s great patron was also the father of the important Filipino modern artist, Fernando Zóbel de Ayala.  In gratitude, Amorsolo taught the young Fernando on the rudiments of art.

The jewelry sales were lead by the Antique Platinum, Sapphire and Diamond Pendant.  With a center Ceylon sapphire estimated at 25.0cts and 127 diamonds with an estimated total weight of 2.85cts., this shimmering necklace sold for $48,000.  Strongly placing second was the Antique Cartier Watch, once owned by Princess Daria Obolensky, with a link-woven flexible pearl band, rose cut diamonds, and white and green guilloche enamel detail, for $22,800.00.

All twenty lots of three different 17th-19th century naturalist artists significantly surpassed presale estimates, realizing a total of $38,928– some might argue that the market for fine naturalist art is on the rise.  Sold lots included hand-colored engravings by Mark Catesby of the Pol-Cat, Grey Fox, Alligator, American Buffalo and the Bahama Coney in his 1754 edition of The Natural History of Carolina, Florida and the Bahama Islands.  Also included in sold lots were two sets of hand-colored engravings by Maria Sibylla Merian from her self-published Metamorphosis Insectorum Surinamensium (1730), of “insects and their plants” in Suriname.

Please visit BrunkAuctions.com for images and full descriptions, email info@brunkauctions.com or call 828-254-6846 with any questions about our bidding process, consigning with us, or with item inquiries.