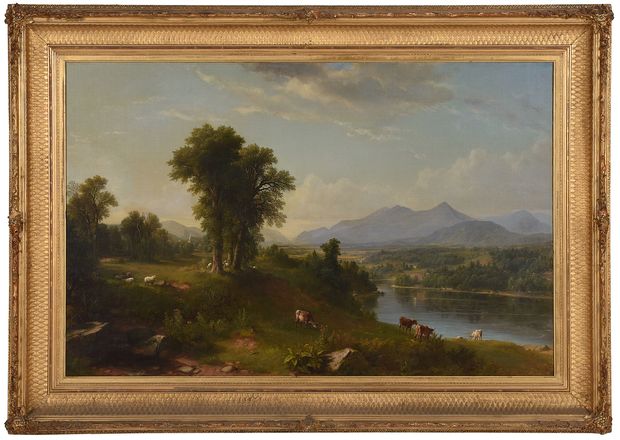 An expansive collection of Federal and Classical American furniture, 19th-century American paintings, and decorative arts that once filled William N. Banks, Jr.’s historic 1820s Federal-style home in Newnam, Ga., is being sold by Brunk Auctions in Asheville, N.C., next month.

Banks, who died last November at age 95, was a consummate collector, who was also a scholar, historian, and preservationist, and who wrote regularly for The Magazine Antiques. The works he owned and wrote about were core to his life, and were purchased, largely throughout the 1960s to 1980s, to fill Bankshaven, his historic home that was also known as the Gordon-Banks House.

He once wrote in the magazine, “I believe that if a house makes a strong architectural statement, that statement should be respected and reflected in its decor, I tried to collect furniture and paintings appropriate to this remarkable early 19h-century house.”

This was a credo Banks practiced.

“He didn’t randomly buy favorite things,” says Nan Zander, a specialist in American fine art at Brunk. “He bought with a mission, and his mission was to fill this period historic home up with things appropriate to it, and the best of their kind available to be found.”

The more than 300 pieces from Bankshaven that will be offered on Sept. 12 reflect this focus. The provenance of all pieces is “exceptional,” Zander says. In most cases, there are original receipts, or copies of original receipts, of when each work was purchased.

Highlights of the furniture collection include a Fine and Rare Tiger Maple Gilt and Vert Grecian Sofa with “fine hairy lion’s paw feet,” from 1815-1820, estimated to sell for between $20,000 and $30,000, and a Very Fine Rare Set of Six Lyre Back Klismos Chairs,circa 1815, estimated to sell between $60,000 and $90,000. The chairs are attributed to Duncan Phyfe, one of the most well-known New York furniture makers of the era.

Also in the collection are several American paintings. Zander, herself, recalls meeting Banks in the 1980s when she was working at Alexander Gallery in New York. Although he lived in Georgia, and had another home in New Hampshire, Banks regularly visited New York City to buy art and furniture. During American painting week each fall, when all the New York auction houses held their sales, he would make the rounds of the galleries.

“Even though he was a Southern gentleman and he had a Southern home, you traveled to New York to get the highest possible quality from the best dealers,” Zander says. “That’s the way it was for decades.” 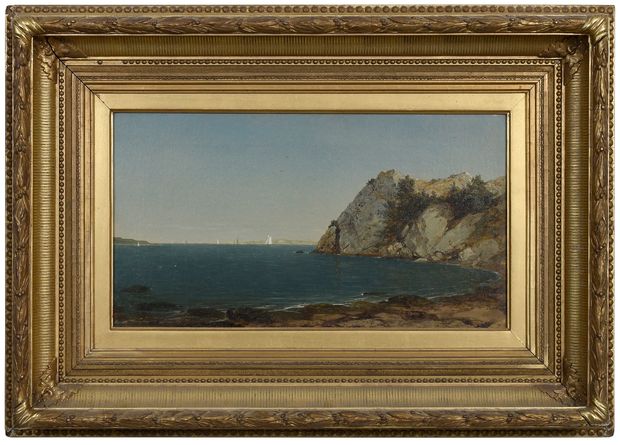 On one of these visits, Zander sold him John Frederick Kensett’s Beacon Rock, Newport, 1856, an oil on canvas, that remains her personal favorite work by Kensett. “It’s an immaculate, spectacular, yet intimate and simple painting by one of my favorite and most important artists ever,” she says.

As Zander remembers that day, “in walks this very handsome gentleman in a bespoke three-piece suit with a hanky in his pocket—he had great taste, and was looking for a great painting to buy.”

The Banks collection also includes eight “White Mountains” paintings, works completed in the mid-1800s from the “very greatest painters of that time” who were visiting New Hampshire’s White Mountains for the first time, Zander says. The region “had just opened up,” with the advent of a railway and hotels, “and were easy for tourists to go see.”

“His love of the White Mountains and White Mountain scenery was fed off of the fact he had a home in New Hampshire,” Zander says. “He looked out his window and he saw these scenes.”

While Bankshaven itself—a home that Banks had moved to Newnan in 1968 from near Milledgeville, Ga., according to a catalog essay—is not part of the sale, it looms large over it. The home was built by Daniel Pratt, who was a “favorite son,” in the town of Temple, N.H., where Banks also lived.

Jim Landon, a friend of Banks who wrote the catalog entry, recalled being greeted at the home by a “snow-white peacock with tail spread,” after making his way up a “long and lumpy” driveway—“a novel sentry and introduction to the elegance beyond.”

As Zander points out, collectors who want a piece of history don’t need to spend tens of thousands. For instance, there are a series of “wonderful still lifes” by George Henry Hall. The most expensive, Raspberries on a Leaf, 1861, an oil on board, is estimated between $8,000 and $10,000.“There’s decorative art and other pieces of furniture that aren’t signed, that can be had for much more affordable prices, but they are just as beautiful,” she says.