William Nathaniel Banks’s collection of Federal and Classical furniture, lighting, 19th-century American paintings, and the accouterments of gracious living that filled the Gordon-Banks house in Newnan, Georgia, some 40 miles southwest of Atlanta, will be sold at Brunk Auctions in Asheville, North Carolina, on September 12. The collection was assembled over a long lifetime by a collector who had deep knowledge of architecture and antiques and the inherited means to acquire what he needed to furnish a period house. Banks died in November 2019 at the age of 95.

Banks’s collection includes furniture by Samuel McIntire and Duncan Phyfe and paintings by Albert Bierstadt, Asher B. Durand, and Eastman Johnson. “William Banks bought from a who’s who of dealers—Stuart Feld at Hirschl and Adler, Alexander Acevedo, Israel Sack, and at sales at Christie’s and Sotheby’s. We have all the bills of sales that document his purchases,” said Andrew Brunk.

Banks had an apartment in New York City for many years and rarely missed a show, sale, or museum exhibition. Brunk said, “It would be nice if his New York friends could see the collection in person; if not we can arrange private viewings in Asheville.” He added, “We are glad our printer is back in business; our last sale was online only without a printed catalog.”

When Brunk was in Newnan to photograph the collection in the house surrounded by a gorgeous spring landscape, he said it felt as if he was in Hollywood in the 1960s or 1970s and could imagine the butler meeting guests at the door with a glass of champagne, which Banks’s friends said was a usual occurrence before many luncheons and dinner parties.

The collection is well known. Banks wrote about it on a manual typewriter for the May-June 2015 issue of The Magazine Antiques. Banks was a regular contributor to the magazine over the years, writing about other peoples’ houses and historic towns for editors Wendell Garrett (d. 2012) and Allison Ledes (d. 2008), who were good friends of his.

Banks had such a deep passion for early Federal architecture, Georgia history, and English landscape design that he talked his mother into tearing down the Tudor-style house his father had built in the 1920s and moving an 1820s plantation house from Milledgeville, Georgia, placing it overlooking a lake on the 280-acre property his father had turned into a English-style landscape with the help of landscape architect William C. Pauley.

In the 1960s Banks discovered the house, built for John W. Gordon (1797-1869), a cotton planter who hired a young carpenter named Daniel Pratt (1799-1873) to build an impressive house on his plantation near Milledgeville, which was the capital of Georgia from 1804 to 1868. Pratt had gone south with his tools and probably a copy of Asher Benjamin’s 1806 The American Builder’s Companion and found his way to Milledgeville, where he built eight Federal houses between 1821 and 1831 before moving to Alabama to manufacture cotton gins.

“I was awestruck by a unique house that had remained virtually unaltered for more than a century; and I confess I fell in love,” Banks wrote in the 2015 article. Banks moved the historic house with its three-story circular stairway and added two wings—one for a kitchen and another for his paintings—and tended the surrounding historic gardens. Family wealth afforded him the opportunity to travel, study, lecture, write, furnish his house, and collect paintings, books on architecture and gardens, and Mercedes cars.

He wrote in the 2015 article that he acquired at auction all three of English landscape designer Humphry Repton’s folio volumes of text and pictures that explicate Repton’s preferences in the designs of parks and gardens. Banks was struck with the resemblance of the landscape at the Gordon-Banks house to Repton’s designs, especially the terrace bordered by a clipped hedge that leads to formal gardens, the perfect setting for a Neoclassical house from the 1820s.

In September, furniture, lighting, paintings, and porcelains with a provenance from the Gordon- Banks house, where William Banks led “a charmed life” (the title of his 2015 The Magazine Antiques article), will move on to other collections. 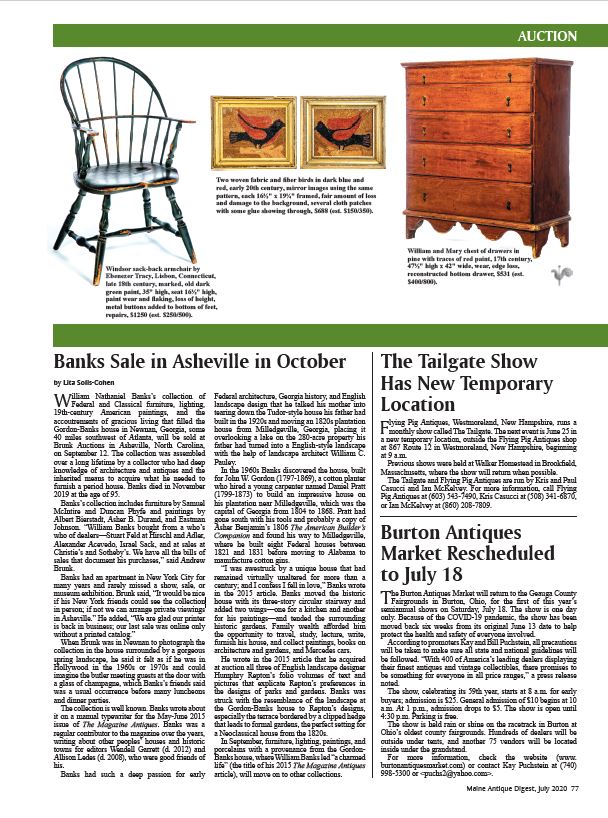 Get news and digital catalogs.