From The Estate of Malvina Hoffman: Modernist Sculptures, Maquettes, Drawings, and Paintings in the September Premier & Emporium Auction September 15-17, 2022

Join Brunk Auction’s for the opening of the Fall Season with our Premier & Emporium Auction taking place September 15-17, 2022. We are pleased to be offering modernist sculptures, maquettes, drawings, and paintings from The Estate of Malvina Hoffman in our September Premier Auction. The following story, written by Didi Hoffman, gives an inside glance at the relationship between Malvina Hoffman and her muse, Anna Pavlova.

Blame it on the Bacchanale. Or rather, celebrate the Bacchanale and how it changed the career trajectory of sculptor Malvina Hoffman and prima ballerina Anna Pavlova’s lives. 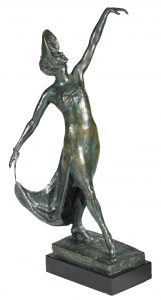 In 1909, at the Paris premier of the Ballets Russes, choreographer Mikhail Fokine’s Bacchanale hit the stage. Fokine considered his choreography “new Russian ballet,” with Pavlova and Mikhail Mordkin’s performance creating a sensual fervor on the stage.

When Otto Kahn, chairman of New York's Metropolitan Opera saw the Bacchanale at the Paris premier, the overwhelming reaction of the audience convinced him Pavlova must dance at the Metropolitan. In 1910, at the London Palace Theater premiere of the Ballets
Russes, the young American sculptor Malvina Hoffman, who lived in Paris while studying under Auguste Rodin, was in the audience. As Pavlova performed the Bacchanale with Mordkin, Hoffman was overwhelmed with a desire to sculpt the ballerina. She purchased tickets to every performance and stood in the aisles drawing the many different movements. 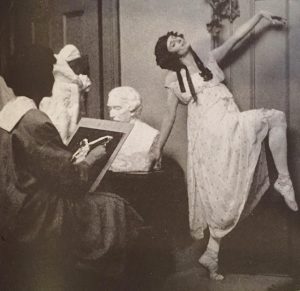 Pavlova became Hoffman’s muse. She dedicated the next few years of her study to sculpt the ballerina with Auguste Rodin serving as a critic and teacher. In 1912, Hoffman’s Russian Dancers, inspired by Pavlova, won first prize in the prestigious Paris Salon for its very modern way of showing movement in bronze for the first time. Up until then, dance in bronze was static, now there was delicate movement.

As Hoffman sculpted her muse, Pavlova toured the United States with the backing of the financier Otto Kahn, today is known as the Uncle Moneypenny, the face of the Monopoly board game. A German native, Kahn missed the European arts in New York City, where he had immigrated and was determined to bring Pavlova to America. After learning Pavlova and Hoffman had never met, Khan’s wife invited the two women to her home for tea in 1914. 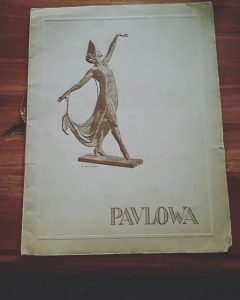 At the Khans, Pavlova invited the sculptor backstage to rehearsals. Hoffman’s study of the dance and the ballerina became more intense; she also began to learn Russian. Pavlova corrected Hoffman’s drawings, helping her perfect the arch of a pointe or the gesture of a hand. Hoffman encouraged the criticisms. A friendship ensued between the famous ballerina and the sculptor.

From then on, these two single women, born during Victorian times, collaborated in the global business of art and dance. Pavlova was a perfectionist, and never allowed any photographs or artwork to go public without approval; yet she began to give Hoffman free reign and posed happily for many sculptures and drawings. She trusted the artist.

Together the women worked to increase Pavlova’s theater receipts. Hoffman created Pavlova’s posters and playbills. She introduced Pavlova to her many friends in society, patrons of the arts. Hoffman sculpted the ballerina in many poses while her teacher and friend Auguste Rodin provided criticism. In Hoffman’s memoirs, she recalled her discussion with Rodin about her largest collaboration, a 26-panel bas relief frieze of the Bacchanale. Rodin called it, “a great thing of beauty, like the Greeks created.”

The frieze broke down the Bacchanale into 26 panels, each one posed by Pavlova and a partner whenever she and the artist were in the same city. Pavlova even allowed her many poses to be photographed for the artist. The frieze took 15 years to complete. Pavlova found this time relaxing, even though they might work well into the night after a performance or long rehearsal. In 1915, while the work was still in process, the New York Times art critic called Hoffman and Pavlova’s frieze, “a potential masterpiece.” He compared Hoffman’s extraordinary study of musculature to Michelangelo and Rodin. 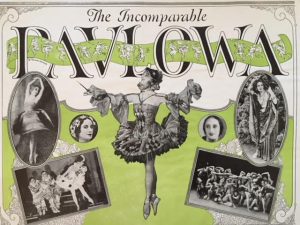 In 1919, Hoffman was the first woman ever installed in the Paris Luxembourg Gardens, only the second American. They installed her over-life-size Russian Bacchanale (stolen by the Nazis in WW2). Hoffman was now considered one of the most important sculptors, man, or woman, of the early 20th century.

Pavlova died unexpectedly in January 1931. Before she died, Pavlova visited her friend Malvina Hoffman’s studio in Paris. Hoffman saw her friend was ill and begged her to slow down and rest, but Pavlova would never disappoint her audience. When Anna Pavlova soon after died of pleurisy, her manager called Hoffman to help him with the funeral arrangements. Malvina Hoffman was so bereft at the death of her muse she wrote in her diary, “my light is blotted out,” and kept the 26-panel frieze of the Bacchanale in her studio for the rest of her life to remember Pavlova. After Hoffman’s death, her estate gifted the entire Bacchanale frieze to the Cedar Rapids Museum of Art in Iowa, where it is on display.

The Premier & Emporium Auction will begin on September 15, 2022 starting at 9 AM and run through Saturday afternoon, September 17, 2022. Bidders will be able to participate in person or via absentee bid, phone, or live online bidding through Invaluable, Live Auctioneers, or Bidsquare. For information about the auction, please email info@brunkauctions.com

Charles Mason Blackmon was a collector of Asian art and objects. Born in Darlington, South Carolina at the beginning of the 20th century, he collected both at home and during his travels abroad. Throughout his many years of collecting, Charles curated a personal collection of fine jade, porcelain, bronzes, and other objects. Brunk Auctions brought a selection of this collection to market in their April 28th Asian Art Auction with great success, and is excited to offer the second grouping in their Asian Art Auction this August 18th, 2022.

Charles began his collecting journey while in his sophomore year of college with the purchase of a cloisonne vase. He first kindled his appreciation for art during his time as a student at the College of Charleston. Following his graduation from Harvard in 1934, Charles’ interest in Asian art and cultures grew when he was stationed in Southern China and Myanmar (Burma) during World War II. His approach to collecting was thorough, as he believed that “determination in finding various objects and a knowledge of them” were important to building a well-rounded collection. He held a special interest in jade, and was known to carry jade objects he purchased in his pockets day to day, so as to familiarize himself with their quality and always have a reference with which to compare other specimens.

In 1961, Charles became involved with several Southern institutions, and over the years loaned pieces from his personal collection to museum collections. The objects in his collection represent a wide range of historical periods and various aspects of life, including personal, everyday objects to those with religious significance – fine jade belt hooks, pendants, and snuff bottles, porcelain covered jars, bronze censers, and more.

The second grouping of the collection of Charles Blackmon comes to auction this August 18th, 2022 at 9:00 AM EST.